Persatuan Sejarah Malaysia Cawangan Sabah AGM has been scheduled on September 24th at 10 am at the Sabah Muzium, Jalan Penampang Kota Kinabalu.
Posted by Man From Borneo at 2:46 AM 1 comment:

Persatuan Sejarah Malaysia Cawangan Sabah to hold its AGM in the first week of September 2011 at the Sabah Archive Department Complex off Penampang Road, Kota Kinabalu.
Posted by Man From Borneo at 7:13 PM 1 comment:

Sabah celebrates the Harvest Festival on May 30-31, 2011 at the KDCA Complex, Penampang, Sabah.

This annual month long event celebrates the harvesting of the paddy, the staple food of many Asian.

There was this story of a young and beautiful girl who sacrificed herself for his community who had suffered a long drought so that they will have a bountiful harvest. She was andamant to go ahead with the ritual despite the pleading of many young men who had been attracted by her charm and beauty. She made some conditions before the sacrifice was carried out; that the first harvest should not be given away and 7 rice stacks should be tied to a bamboo pole and kept in the rice barn. The land was fertile again and behold a beautiful lass came out of the rice barn and they called her Unduk Ngadau.

Now Unduk Ngadau is the crowning of the local Kadazan Dusun Murut beauty culminating the Harvest Festival, but they have to be judged the winner in their own villages to compete in the State contest.

Persatuan Sejarah Malaysia Cawangan Sabah (PSMCS)had been invited to attend a workshop on Public Book Writing by Dewan Bahasa & Pustaka Sabah, scheduled on June 13-14, 2011 at the Sabah Muzium Complex, Kota Kinabalu.
Posted by Man From Borneo at 3:11 AM 1 comment: 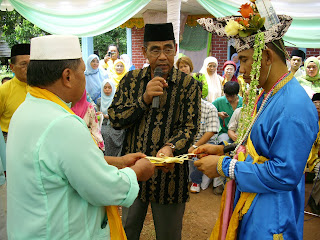 The Cocos ethnic has this at their wedding called 'Tarik Lipat'. I am not sure if other ethnics have this too in their culture. Before they do the dance called 'Melenggok', the bridegroom and father-in-law will first have to pull this piece made of young coconut leaf called 'Tarik Lipat'. The witness holds the plate which has the coconur leaf and some yellow rice and coins.

The 'Tarik Lipat' symbolises the breaking of whatever enminities that had evolved around the two families that are now bonded as one.
Posted by Man From Borneo at 5:51 PM 1 comment:

Storytelling time at the Sabah Muzium 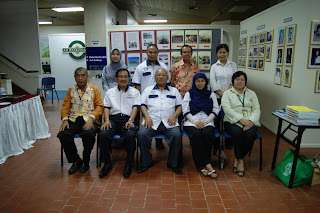 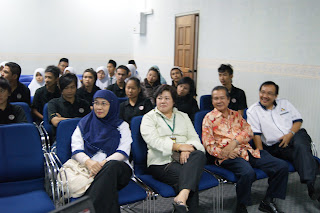 Teachers and students from the College and schools were treated to a Storytelling session by Persatuan Sejarah Malaysia Cawangan Sabah at the Sabah Muzium Complex in conjunction with the Craft Exotica 2011 festival. It was the story of the Cocos ethnic that came all the way from the Cocos-Keeling Islands in 1949 as estate workers in the abaca and tobacco plantation in Tawau and Lahad Datu. The Storyteller traced their journey from Malacca in the year 1811 when a group of about 3,000 crossed over to Banjarmasin, Southern Borneo State at the invitation of the Sultan of Banjarmasin to help keep peace against the local uprising, mainly coming from the Dayak and the Bugis communities.

Some people called the Cocos ethnic the 'White Tiger'. They could have been brave warriors coming from Malaya and involved in the Java War in 1811 (the war betweent he British and Dutch in Java, the war that the British won). Those group of people was not known as Cocos ethnic yet until they settled down at the group of 24 islands in the Indian Ocean called the Cocos-Keeling Islands.

This ethnic can be found in the east coast town of Tawau, Lahad Datu and about 300-400 in a scheme at Pamol, Sandakan.
Posted by Man From Borneo at 5:50 PM 1 comment: